Bacolod City, Negros Occidental— With the official filing of Certificate of Candidacy of the 2022 elections kicking off tomorrow, October 1st, incumbent Congressman Greg Gasataya of the lone district announces today that he will be running as an independent candidate for congressman, distancing himself from the political groups of both incumbent Mayor Evelio Leonardia and businessman Albee Benitez, who previously announced their intent for the mayoral race.

In a press conference streamed on his official Facebook account, Gasataya made the announcement that he will run as independent candidate under Nationalist People’s Coalition (NPC) after weeks of prayers, discernment and consultation with his supporters.

He stressed: “I am not taking sides. I will run as neutral.” Adding, that both mayoralty candidates are his maninoys in his wedding. 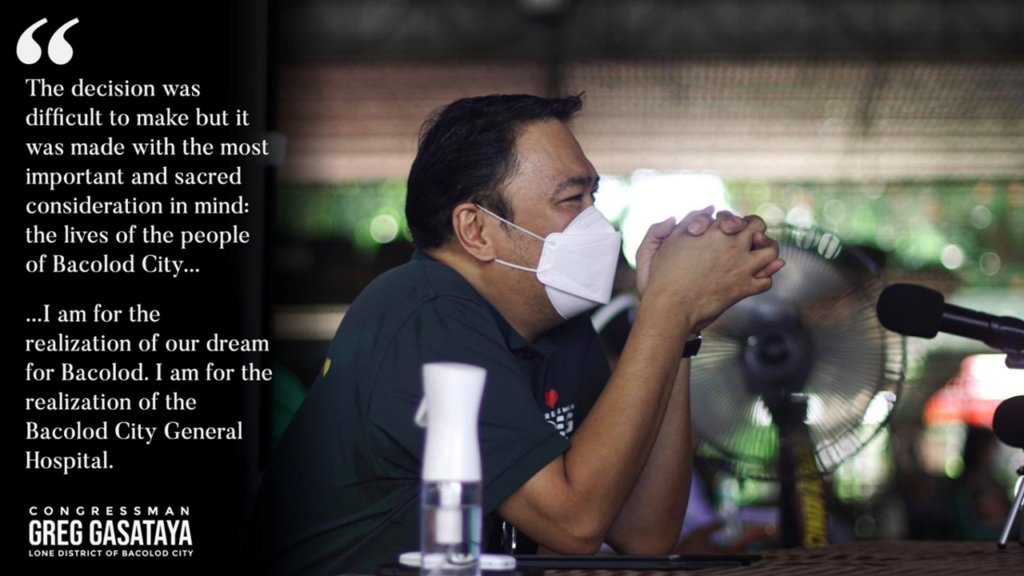 Running as independent after weeks of prayers and discernment.

According to Gasataya both are also significant to his personal and political journey. It can be recalled that Gasataya started his political career in Bacolod as a member of Leonardia’s party after the mayor invited him to join the local politics. Back then, Gasatya was one of the prominent anchors of local radio station dyWB Bombo Radyo.

While in congress, Gasataya was also able to forged good relations with Benitez and is also a member of the Visayan bloc that former congressman Benitez had established.

Speaking to reporters with the perspective of the Bacolod City General Hospital as his backdrop, the solon added that his decision is ultimately premised on the realization of the Bacolod hospital which will start construction next year in the midst of election season, in the midst of a pandemic. Gasataya has lobbied for the establishment of the first Bacolod hospital to address the lack of health care facility in Bacolod through the years.

“We can all agree that we need a hospital in these most critical of times. Our healing greatly depends on it. With that utmost consideration in my mind and in my heart, I want to ensure its smooth and successful implementation next year,” he concluded.

With this last minute change, it is not yet known if Leonardia is fielding a congressional candidate against Gasataya.